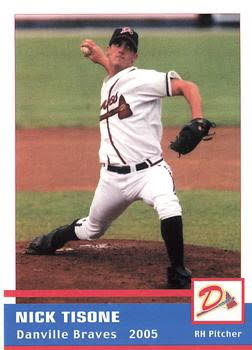 Nick Tisone Jr. is Director of our Midwest Operations based in Scottsburg, IN.  Coach Tisone started his playing career in 1994-95 as a member of the 11U/12U Select AAU Louisiana State Baseball Champions and played in the AAU 12U Select World Series in Omaha, NE in 1995.  Nick was mentored 1994 through 1998 by Coach Jim Schlossnagle, head coach at TCU, and Buddy Goldsmith, assistant head coach and recruiting coordinator at UNLV. In 1998, Nick became the youngest player to start on his high school varsity team as an 8th grader, playing 3B/SS/P at Mandeville High School for Coach Carey Stockton.

During his four-year high school career, Nick was named as the “Top 2-Way Player in the Country” by Perfect Game USA.  He also gained 1st Team All-District honors for four straight years.  In 2002, he was also the New Orleans “Metro Player of the Year” and “1st Team All-State”.  He was named to the Louisiana All-Star Game, where he received MVP Honors.  He was twice named to the Connie Mack World Series All-Tournament Team as both a position player and a pitcher.  His team was the National Runners-Up after winning the South Regional Qualifier.

As a college freshman, Nick played in the prestigous Cape Cod League during the summer of 2003.  He also received over 30 scholarship offers to colleges all over the country and was drafted by the Houston Astros in 2002 and the Kansas City Royals in 2003. He attended Pearl River Community College and Tallahassee Community College, where he played for Coach Jay Artiques and legendary coach, Mike McLoud. Nick participated in two Junior College World Series and was rated the top junior college pitching prospect in 2004 before being injured.

In 2004, Nick received a scholarship to play for the University of Alabama. At the same time, the Atlanta Braves offered him a free agent contract to start his professional career after his junior college career at Tallahassee Community College. Nick played six-years of professional baseball in the Minor Leagues before accepting a position at Wadsworth High School as their Freshman Coach in 2009.

In 2008, Nick started his own company, Nick Tisone Baseball.  He provides private lessons for players of all ages and in 2017, as an extension of Nick Tisone Baseball, he began the Derby City Venom, a youth baseball program for youth players in multiple age groups throughout the Louisville Metro area. Nick joined forces with Knights Knation late in the summer of 2022 and will have multiple High School aged teams based in the the Southern parts of Indiana as well as the metro area of Louisville, KY.