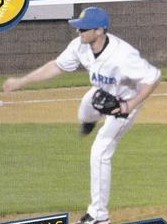 Will Rankin played high school baseball from 2003-2007 for Hartselle High School (AL) and went on to play at Wallace State Juco in Hanceville, AL from 2007-2009. He played one year at North Alabama (2010),  and transferred to Southern Polytechinc State University (2011) where he earned All Conference honors. He was drafted (2011) in the 17th round by the Colorado Rockies and went on to play professionally for five seasons winning a championship and had a streak of 33 consecutive innings allowing no earned runs. He retired from playing  in 2015. He joined the Knights in 2017 and has been a head coach at various age groups. He has been privately training athletes from 2011-present and has assisted numerous players that have moved on the next level.