Wes Carr is a 1992 graduate of Mandeville High School and was a 5 year letterman in baseball and basketball. In 1997, he graduated from Southeastern Louisiana University with a degree in Kinesiology. Prior to his first year in college, he began coaching youth baseball along side Coach Jimmy McCarthy.  He joined the coaching staff of the Knights in 2013 and then moved into an advisory role on the Knights Roundtable in 2019. Outside of baseball, Wes was very successful in his business career in the oil and gas industry with PEC Safety in the mid nineties, worked his way up and then served as the company’s President from 2010 until the company was sold in 2019. One highlight of his business career came during the 2010 oil spill in the Gulf of Mexico, where he oversaw and managed the process of training all workers involved in the oil cleanup.  Wes was responsible for setting up over 40 training locations throughout the the gulf coast and utilized a network of roughly 60 instructors to conduct courses. Over 155,000 workers were successfully trained and put to work on cleanup in just three months. Wes is married to his wife, Wendy and the couple has three kids, Sadie, Savannah and Wes Jr. 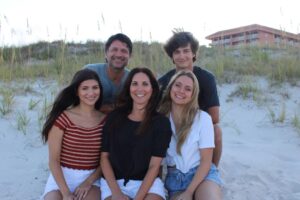