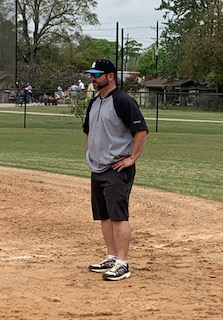 Matt Boyles is a high school graduate of Woodlawn High School Baton Rouge in 1999.  At Woodlawn, he was a 4 year letterman as catcher earning All-State and All-district honors.  After high school, Matt attended McNeese State where he played baseball for 4 years. As a catcher at McNeese, he was part of teams that were 2x Conference Champions and 2x NCAA Regional appearances

in 2000 and 2003.  Matt now lives in Baton Rouge and is married to his wife Sarah and four boys Charlie, Jack, Sam, and Brady.  He has coached youth baseball for 9 years with Baton Rouge Bandits, LBA, and Louisiana Knights.