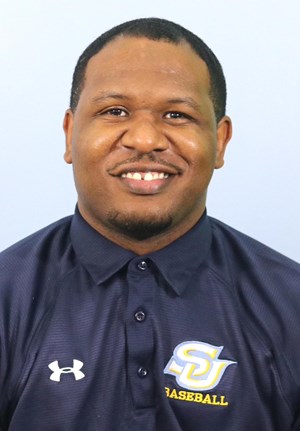 Trennis Grant was officially hired as the head baseball coach at Dillard University in the February of 2022. His first year of coaching on the field will be in the spring of 2023 when the program starts to play games.

“We are so proud and excited to welcome Coach Grant to our Dillard University athletics family,” Dillard athletics director Dr. Kiki Baker Barnes stated. “Coach Grant quickly established himself as our top candidate based on his strong recruiting background, enthusiasm for the job, local and national baseball ties and vision for the Dillard baseball program.”

“First, I have to give thanks and honor to God because without God none of this would be possible,” said Coach Grant. “I would also like to thank Dr. Barnes and the staff for welcoming me with open arms. I felt at home from the minute that I stepped on campus through the entire hiring process. I am grateful to be the Head Baseball Coach here at Dillard University. I’m excited to get started and recruit the newest Bleu Devils for our baseball program. We are going to recruit great student-athletes that represent Dillard University, the athletics department and the baseball program well. Every day will be B.L.E.U  D.A.Y.S. (Better Leader Exceeding Unitedly and Dillard Advancing Yesterdays Successes). We will fully embrace the university’s motto Ex. Fide Fortis which means from faith comes strength. GeauxBleu!!!”

Grant has seven years of coaching experience at the NCAA level.

Most recently he was serving as the Assistant Coach at Southern University for the two years. At Southern, he was in charge of coaching and developing outfielders, catchers and the team’s hitters. Under his watch, the program won the 2021 Southwestern Athletic Conference (SWAC) and made the NCAA Regional. He helped mentor a pair of All-SWAC players in Taj Porter and O’Neill Burgos during the 2021 season. He also aided five Southern players make the SWAC All-Tournament Team in Zavier Moore, Isaiah Adams, Enrique Ozoa, Colton Frank and the MVP of the Tournament O’Neill Burgos. Grant also helped the team put up a team grade—point average of 3.0 during the spring semester of 2021.

Prior to his time at Southern, Grant spent two years working as Assistant Coach and Recruiting Coordinator at Alabama A&M from 2018-2020. Among his duties were coaching and developing outfielders, catchers, infielders and hitters. Grant spearheaded the national recruiting at Alabama A&M that saw the program recruit from 18 high schools in 10 different states. Among his accomplishments were helping the team improve their stolen base totals from the previous season and mentoring All-SWAC player Johnathan Smith II.

Coach Grant served as the Assistant Coach at the University of Arkansas – Pine Bluff from 2016-2018. In the role he worked with the team’s catchers, outfielders and hitters. He helped improve the national recruiting footprint of UAPB by successfully bringing in 14 players from junior colleges and high schools from eight different states. In his two years with the program, Coach Grant aided the team improve in nearly every offensive statistical category including hits, home runs, triples and stolen bases. He also served as the academic liaison for the team as the team put up a cumulative GPA of 3.26 in 2016 and 3.33 in 2017.

The Canton, Mississippi native graduated from Arkansas Tech in 2014.

He resides in Gonzales, Louisiana with his wife Cierra and their four children.  Coach Grant will be in his 1st summer with Knights Knation in 2022.