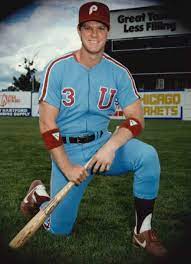 Born and raised in St. Bernard Parish, Clyde attended Chalmette High school was a 3-year letterman and
record-breaking athlete in football, baseball and track. However, his passion for the game of baseball
was undeniable as he continued his journey at Delgado Community College. While at Delgado, he hit a
walk-off double to put the school in their first ever NJCAA World Series. Always cool and collected
under pressure, Powell introduced himself to the NJCAA World Series with a towering home run over
the left field wall. His extraordinary efforts did not go unnoticed when in 1985, during the MLB draft,
Powell was selected in the 2nd round by the Philadelphia Phillies. Throughout his tenure with the Phillies
organization, he played in Washington, Oregon, New York and Florida.
After playing professional baseball, his love for the game continued through volunteer coaching,
training, and mentoring countless athletes. As a coach, Clyde is a calm leader who leads by example,
inspiration and motivation.
High School Baseball
1982 and 1983 All-District Player, All-Legion, All-Metro
College Athletic Career